Trijicon MRO - Best on the Market? 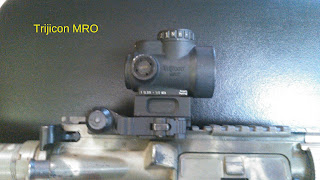 I was asked after I put up my video on this optic if I thought it was an Aimpoint killer. I chose not to answer simply because I believe Aimpoint is the Aimpoint killer.  My experiences with the PRO left me wanting a different optic before I knew what one I was going to get. Now mind you, I have a T1 on my AK that runs fine so I’m not here to trash them as a whole, I just haven’t had the same experience that many others have had.
Back in September I was at a Sentinel Concepts class hosted by MIdwest Industries and Steve Fisher had an MRO on his demo gun. I had seen the Travis Haley video announcing it, but that was all of the prior knowledge I had. So Steve let me check out the sight and I was sold. I had to get me one. They were just starting to trickle in to some local gun shops but not in large numbers. A Tactical Response Alumnus contacted me and told me his buddy just got a pair of them in at his shop. A few phone calls later and it was a done deal and he was bringing it to class that weekend.
My initial impression was very good. I only had the really really low mount that comes from the factory. I was surprised, that it actually was usable on an AR. Far from ideal but usable. At that time mounts were difficult to locate but my good friend Brian at Tacticool Guns and Gear sourced a couple of ADM mounts and graciously hooked me up. I had also talked to Pete at Midwest Industries and he told me that their first batch of mounts were finishing up in a few days. After using both of them, I prefer the throw lever on the Midwest mount, its much lower profile. Otherwise both mounts are rock solid and either will perform as expected.
As for the optic itself, let’s look into the things that set it apart. First the front lens is larger than the rear lens. This is brilliant (pun intended). When we look at things, the further away they are the smaller they are. So anytime you look through a tube, the hole in the far end appears smaller than the close end. Obviously the longer the tube the more pronounced this is. With the shape of the MRO, which certainly fits in with the style of an ACOG, this effect is nonexistent. One of the first comments I hear when I hand it to others to check out is “Wow, the field of view is huge”. When comparing the field of view to a more traditional tubed 30mm red dot, this sight seems much more clutter free even though it has a 25mm front lens and a 20mm rear lens. The engineers at Trijicon had a few other tricks up their sleeve to facilitate this as well. The main brightness control and battery compartment was moved to the top of the sight, moving out of the shooters lateral field of vision. In addition this makes the control ambidextrous which is always a plus. The next thing they did to make the body of the sight less obtrusive was to use a different type of adjustment for zeroing. The adjuster are flush and internally sealed, This removes the need for protruding caps to keep the watertight integrity. 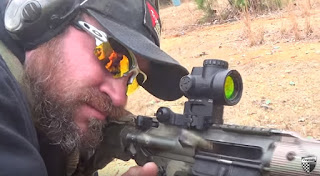 As long as I am talking about those features, let's look into them with a little more detail. With the brightness control there are fewer options for brightness than I am accustomed to. But this has yet to present me with any issues. the control knob goes OFF, n, N, 1, 2, OFF, 3, 4, 5, 6.  The addition of the OFF position in the middle is very clever. If for some reason you like to turn your optic off this keeps you one click from a usable setting as opposed to running it through all of the low ones to get to the one you want. Personally I use setting 2 at night when I go to bed, it works fine in a dark room. 3 is usable for outside although depending on the lighting conditions, I use 4 often as well. I found this refreshing as I had been using my Aimpoint PRO and it just never got bright enough on a sunny day to pick it up quickly.

The adjusters, as mentioned, are flush and have no caps. The integrally sealed unit mens we are not relying on the O-rings in the cap to maintain waterproof qualities. It also means my dumb-ass won't lose the caps. Trust me, it's a known issue with me. They are your typical ½ MOA adjustment that is the industry standard. Any flat item can be used to make adjustments. A screwdriver, of course, a coin or a rim of a shell case all work great. This holds true for the battery cap as well.
Let’s move on to the part that sold me on this optic. The dot. It’s a rather standard size of 2MOA. But where it really shines (yet another pun) is its roundness and crispness. For years I bemoaned the dot on the micro series. I always wanted to know what sacrifices were made when Aimpoint made the micro series. I have seen a whole host of shapes for those dots, oval being the most prevalent, all the way to jellybean. The comp series doesn’t seem to exhibit this. Although I will say that Trijicon sure did close the gap to EOTech when it comes to crispness. This was one of the areas that L3 far exceeded the Swedes and it looks like another American company did the same.
The stated battery life is listed in years. I can’t vouch for this since I’ve only had it for a few months. It has outlasted my last PRO so it’s certainly on the right track. They do say on setting 6 it will last for about a month. Note to self:  if I’m shooting at the sun (the only place I’d need to turn it up that far) it will not last but a handful of weeks. With all the talk of battery life, in my limited experience, the big players are all close enough that I pay it no heed.

After I released my video, I got some questions about my comments on magnification. I wasn’t sure if it had it or not and I managed to convince myself that it both did and didn’t. All I could determine was that it was not 1.1 like a Nightforce. With some further digging, I find that Trijicon has it listed as 1.05 magnification. They say the optical engineers did this to make the dot the most crisp and obtain a better focused image through the lens. That’s all above my head but that's what they get paid for.  As I am told by sources in the industry, this level of magnification is standard in a non magnified optic. Aimpoint does the same thing, it has been reported that the micro series is 1.025 so the numbers to seem to support this claim. All in all, any talk of this minor magnification is irrelevant in my eyes, it’s a non-issue.

At the end of the day, the MRO is not what I would call perfection. If physics did not apply to red dot sights, I would have a list of features that I would want and I would pay more than a fair price to have them. But until the point where that list is feasible from an engineering standpoint, I will choose the Trijicon MRO over all the options currently on the market. 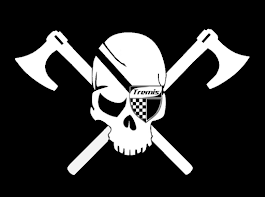 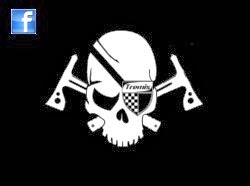